Pourquoi was Anne Boleyn's lapdog. Some sources claim he was a Havanese, a dog breed that originated in Cuba, closely related to the Bichon. Havanese dogs are known to have a charming habit of tilting their heads in an inquisitive fashion, which may have been the root of Pourquoi name: For What? in French. The name is most commonly rendered in English as "Purkoy," a phonetic spelling which was also used in Old French.

Pourquoi was given to Anne by Honor, Lady Lisle. Honor was a very ambitious woman who strove to advance her family by cultivating a close relationship with the queen. She was born Honor Grenville and her second husband was Arthur Plantagenet, the bastard son of King Edward IV. (Arthur was Henry VIII's uncle, half-brother of Henry's mother, Elizabeth of York.) Honor traveled with Anne on that momentous visit to Calais in 1532, and remained behind in the city when her husband was appointed governor. Honor kept up with the comings and goings of the court through letters to her family and friends, 3,000 of which are preserved in the National Archives as the Lisle Letters. They form an incredible archive of information about the royal court.

Pourquoi is mentioned in the letters by John Husee in the winter of 1533. He requests Lady Lisle send her dog "Purquoy" to him, because Lord Francis Bryan is asking about him two or three times a day. Did Bryan and the Lisles think Anne would like Pourquoi? The king had recently been given one of their spaniels via a friend. Henry Norris wrote to the Lisles to tell them the king had personally thanked them, a pretty big deal when you consider the dozens of gifts a king got every day; mentioning one of them and the giver by name was thrill. And so perhaps they thought gifting a dog to the queen would be equally as efficacious in getting her attention.

Francis Bryan took Pourquoi to court, and Anne Boleyn seems to have fallen in instant love with the dog. Bryan reported the dog hadn't been in his hands for more than an hour when the queen took it from him, and she sent the Lisles her "hearty thanks" for the dog. 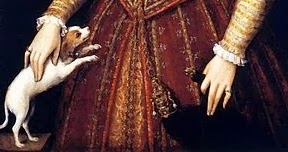 But if Honor thought this gift would lead to the long hoped-for appointments for her daughters at court, she was sadly disappointed. She sent the queen gifts of live quail, a cage with a songbird from her own chamber. Her agent wrote to tell Honor the bird did not cease to give Anne "rejoicing" from its pleasant songs, which should be a comfort to Lady Lisle. But the "comfort" Honor sought was not on offer: Anne had no places open for the Plantagenet girls in her retinue. It wasn't until the reign of Jane Seymour that Lady Lisle got her wish. 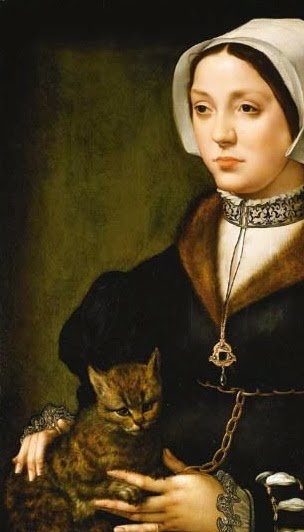 Pourquoi would have had a diet of bread, which people of the Tudor age thought would keep a dog gentle and discourage his hunting instincts. Daily, he would have been perfumed and brushed, or had his fur rubbed with a "hair cloth" to remove any stray fur that could adhere to his mistress's fine gowns.

Sadly, Pourquoi died in December, 1534. Margery Horseman, one of Anne's ladies, wrote to the Lisles that the dog had "fallen from a window" and her ladies were so afraid of Anne's reaction, they asked the king to break the news to her.

As usual, Ambassador Chapuys is gleeful in reporting any misfortune that comes Anne's way in his letters to the Emperor. He makes a callous joke of it later, saying that news of a military disappointment for one of their allies made the king and queen look like dogs that had fallen from a window. Some have taken this to indicate Chapuys may have had something to do with the dog's "accident" but I think it's unlikely.

The Lisles discussed the possibility of getting Anne another dog, but were told Anne did not want one. It doesn't appear Anne ever replaced Pourquoi. As any dog-lover knows, a beloved pet can't be "replaced" in your heart. Perhaps, Anne felt the same way.

The Lisles cast about for ideas and proposed getting Anne a monkey, but were told Anne could not abide the sight of the beasts. Some writers have speculated Anne disliked monkeys because they were imported from Katharine of Aragon's native country, Spain, but perhaps she simply didn't care for them regardless of their origin.

Anne had another dog, a hunting greyhound named Urian, given to her  in 1532 by William Brereton. Brereton had named the dog after his older brother before giving it to the queen. Later writers believed "Urian" was a Satanic name, tying it in with the spurious posthumous claims Anne had been charged with witchcraft. But "Urian" was a common name of the time, with no evil connotations.

Urian was involved in an unfortunate incident during Anne's last progress. Urian escaped his handlers and, along with another dog, ripped out the throat of a cow grazing nearby. The king's accounts record reimbursement for the cow's owner. One imagines Anne didn't do much cuddling of that particular dog!

Henry had passed an ordinance in 1526 that the only dogs allowed at court were ladies' lapdogs. So many dogs were at court that their waste was becoming a real nuisance. Part of the problem was pets sometimes weren't housebroken - a servant cleaned up after them. But if a servant didn't see the mess before someone stepped in it... With hundreds of dogs in the palace, "accidents" could quickly become a real problem. Smaller dogs were easier to deal with.

Only nobles were allowed to have large dogs, so owning a greyhound, mastiff, or a wolfhound was a symbol of status. A commoner with a large dog was assumed to be poaching large game. There was a hoop in each district, and a dog belonging to a commoner had to be small enough to fit through the hoop.

Some courtiers could obtain special permission to keep their large dogs at court, but they had to be housed in the kennels to keep the palace "sweet, wholesome, clean and well furnished, as to a prince's house and state doth appertain."

Henry himself kept spaniels, beagles and hunting greyhounds. His fool, Patch, is recorded as sleeping among the spaniels in the king's chamber. His greyhounds wore iron collars, some with toretts (spikes) on them. Sixty-five dog leashes were inventoried as being among the king's possessions when he died. 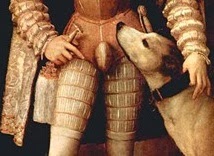 Henry's two favorite dogs, Cut and Ball, kept getting lost. Fortunately, Henry's lapdogs wore collars of velvet and kid leather with gold and silver Tudor rose and portcullis emblems on them, so the dogs could be instantly identified as belonging to the king. The king's accounts show payments of rewards to people who found them and returned them to the palace. They were given the large sum of fifteen shillings, which was the equivalent of a couple of hundred pounds today.