Legends of the Selkies

The legends of the selkies, or silkies, as they're sometimes called, originated in Ireland, Scotland, and Iceland. They were the immortal fae-folk of the sea.

According to the legend, selkies were shape-shifters. In the sea, they took on the form of a seal. When they came to land and shed their magical pelt, they could shift to human form.

The most well-known selkie tale is The Selkie Wife. Will's grandmother tells him one version of the tale in Under These Restless Skies:


“I will tell you the tale of the Selkie Wife. Once, a fisherman of the North Sea happened upon a girl dancing in the waves by the shore. Naked, she was, for selkies do not know they should be ashamed of their nudity. He found her pelt tucked into a crevice in the rocks.”

“Aye. Selkies have a magical bit of fur. When they don it, they change to their true form.”

Will tried to remember other tales he had heard. “Are they not seals?”

“Nay, not a seal. A selkie, the fae-folk of the sea. Though they may look like a seal, they are different. They are creatures of magic, immortal, gentle, and good of heart. There are tales of them saving drowning sailors by swimming them to shore, and of bringing to the poor the gold they find on the sea floor.”

Will steered her back to the story. “He stole her pelt? Whyfore would he do that?”

“When their pelt is stolen from them, they are bound to he who took it, trapped in their human form on the land until it is willingly returned to them. 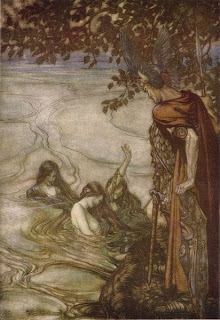 “The fisherman took the selkie maiden’s pelt, for he was enchanted by her on sight. Beautiful, selkies are, when they are in their human form. The women-folk are said to be gentle and kind, excellent wives and mothers. The men-folk are said—” She looked down at Will’s young face and smiled slightly. “Well, the men-folk are said to know how to make a woman happy. A lonely maiden or an unhappy wife may summon a selkie when she sheds seven tears into the sea.

“The fisherman was a widower with children in need of a mother, so he bound the selkie maiden by taking her pelt, and brought her home to care for his children. And a good mother she was, for selkie women love children, even land-children not of their own.

“The fisherman kept his Selkie Wife’s pelt locked in a chest, and kept the key ‘round his neck, even as he slept. But even if the trunk had been unlocked, she could not have taken it back. It must be given back to her, willingly, or she cannot touch it.”

“Was she happy as the fisherman’s wife?”

His granddame shook her head. “The fisherman was a cold man. He would not allow his wife to swim or frolic and play as selkies are wont, nor said he any loving words to her. She tried to make him love her, for selkies have powers to that end, but his heart was hard and empty.

“The Selkie Wife sat by the window, watching the waves every day, longing to return to her true home and slowly, she began to pine away. Like all of the fae-folk, the selkies are immortal, but their hearts are fragile. Sadness can cause them to wither and fade.”

“If they are unhappy, they can die of it?”

“Aye, but they are spirited creatures and it takes little to lift their hearts. A kind word, a smile, a swim in the sea. Some selkies come willingly to the land to marry when they fall in love with men on the land, and they are happy. But their first love will always be the sea. 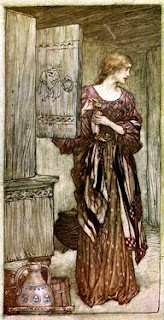 “One day, the fisherman forgot the key and his children found it. Curious, they unlocked the trunk they had never seen opened, and the Selkie Wife asked the children to give her the pelt inside. Willingly, they did, for they knew not what it was.


“And when they handed it to her, the Selkie Wife raced down to the shore, shedding her gown as she did. She donned the pelt and changed into her selkie form to dive into the waves. Her husband’s children saw her leap and play in the sea, and though they had not known what she was, and would miss her sorely, they knew she was home where she belonged and rejoiced for her.

“The fisherman did not. He was enraged when he found his wife gone. For weeks, he searched the waves for her, but when a selkie’s pelt is returned, she cannot meet with the man who took it for seven years.”

His granddame shrugged as she took another wad of wool from the basket and began to briskly rake it with the combs. “I know not. ‘Tis just the enchantment. She was hidden from his eyes, even if she stood before him. Still, the fisherman searched for any sign of her. And then, one day, he came upon a selkie man, the Selkie Wife’s true husband. And the fisherman slaughtered him to spite his wife.” 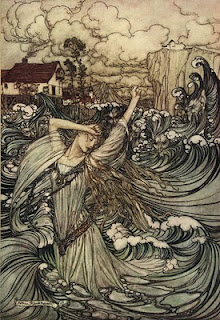 Will grimaced. “Did she take her revenge on him when the seven years had expired?”

“I have heard two versions of the tale. One says that she still roams the waves, mourning for her lost love, and the other says she takes her revenge on fishermen when she comes upon them. Any man who drowns is said to be her doing, that she became a sea-witch, calling up storms to avenge her love.”

“What do you think?”

She smiled softly, and under her wrinkled face Will saw the ghost of the charming young lass she had been when she first heard the tale. “Methinks she grieves, but does no harm. They are said to be kind and gentle creatures, and ‘tis not their nature to hurt others. Still, ‘tis sad to think of a woman who shall mourn her lost love forever as she roams the cold waves.”