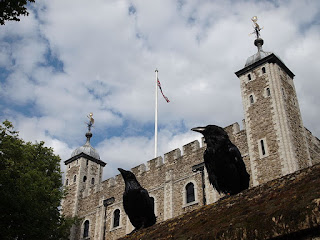 At nine AM, Anne Boleyn left the royal apartments where she had been imprisoned and walked around the northwest corner of the White Tower to the scaffold.

She carried a prayer book in her hands and read from it as she walked, but she kept glancing back over her shoulder. Was she looking for a messenger, riding into the Tower with a pardon in his hand? It's possible that Anne expected - up to the very last instant - that Henry would relent and pardon her, and send her to a nunnery, as Cranmer may have promised to get her to sign the annulment papers. 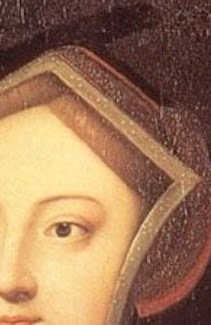 That morning, Anne Boleyn wore a gable hood. Likely she had chosen it not for fashion's sake, but because it was a purely English style. Over her gown, she wore an ermine mantle. By all accounts, it was a beautiful, warm spring morning, so she wasn't wearing the cloak to ward off the chill, but to emphasize her regal status. Though the council had debated whether it was even possible to strip her of her title because she had been crowned and anointed, her choice of clothing stated that Anne Boleyn would die as Queen of England, regardless of what they had decided.

She reached the scaffold and found a large crowd waiting for her around it, over a thousand people - some sources say two thousand. It was bedecked with dozens of yards of expensive black velvet, as suited her queenly rank - until the very last moment, the niceties must be observed. She climbed the few steps to the straw-strewn stage, where she would put on her last performance. 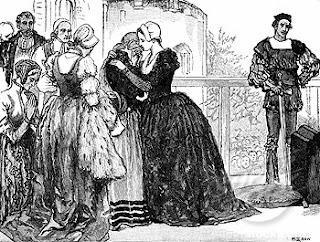 Anne had now been awake for forty-eight hours, but she seemed to show no sign of her exhaustion. The Bishop of Riez, one of the "foreigners" whose attendance Henry hoped to avoid, wrote later that she had never looked more beautiful. In her final moments, Anne Boleyn was truly worthy of the title of queen, regal and brave. She comforted her ladies, with an "untroubled countenance."

Many of the highest nobles in the land were present, people Anne had seen every day at court. However, none of Anne’s family, save her uncle, the Duke of Norfolk and her aunt, Lady Shelton, were present.

Henry FitzRoy, the king's bastard son, also stood in the crowd. Only days before, his father had hugged him and wept that FitzRoy should praise God he and his half-sister Mary had been preserved from that "venomous whore" who wished to poison them. FitzRoy had sat on the jury which condemned Anne to the scaffold, and now he was here as his father's witness. 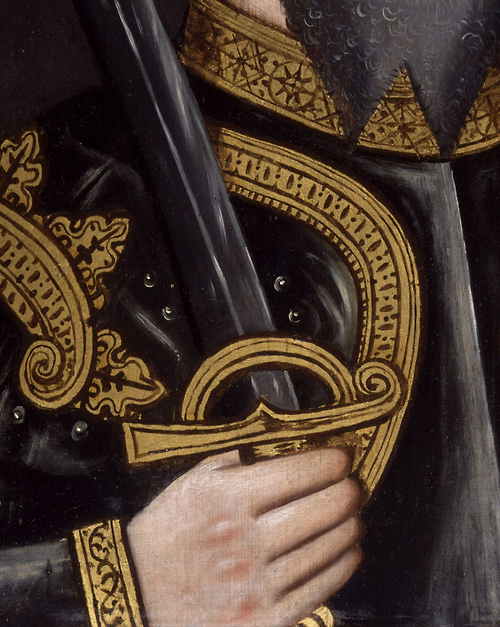 The executioner, a French swordsman, knelt before her to beg for forgiveness. Historian Alison Weir notes that for him to have reached London in time for the execution, he would have to have been summoned before Anne's trial even began. Anne said the expected words granting him forgiveness in French, and asked that he not perform his office until she said what she needed to say.

One can almost feel the tense intake of breath that must have swept through the court officials present. Would Anne defy convention and swear her innocence before this crowd? Kingston had sent a note to Cromwell, fretting about the possibility. They had failed to keep the crowd small, nor had they been able to prevent members of foreign courts from attending. Anne Boleyn's final words would spread far and wide.

But Anne kept her dignity and poise. She said she would speak nothing against her sentence, and praised the king as a good and gentle prince. She asked the onlookers to pray for her.

With that, she handed away her prayer book and began to disrobe. Off came her ermine-trimmed cloak, necklace, and hood - which she had to remove herself, because her ladies were trembling too badly. Her gray damask gown was unlaced. Perhaps there was another intake of breath when her scarlet kirtle was revealed. Scarlet, the color of martyrs. Anne had always known how to make a statement without saying a word.

The gown was laid aside for the executioner, part of his traditional payment. Her auburn hair was carefully tucked up into a white cap, leaving her long, slender neck bare.

Anne knelt, and took a moment to carefully tuck her kirtle around her feet to avoid immodestly exposing her ankles when her body fell. Accounts vary as to whether she was blindfolded. I don't think she was.

She bowed her head and began to pray.

And then, something remarkable happened. One by one, the thousand people watching dropped to their knees in the grass, and began to pray with her. Some openly wept. Only FitzRoy and Charles Brandon remained standing, likely staring around with incredulity at what was happening. Such a thing is reported at no other execution of the era. I have a wistful hope that Anne saw it and was touched by their tribute. 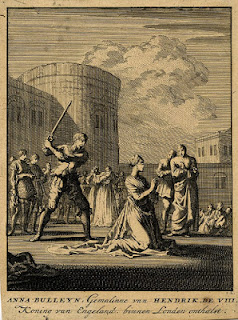 Anne prayed aloud, repeating the same phrase over and over. The executioner moved toward her and her eyes flew open when she heard the sound.

She went back to praying and he tried to move again, but her beautiful black eyes flashed to him. They must have welled with fear. How could they not?

The executioner was a kind man. He turned toward the stairs and called, "Bring me my sword!"

Anne's head turned to watch the steps, and that's when he swept up the sword that had been hidden in the straw. A last mercy: she didn't have to see it coming.

The instant her head fell to the straw-covered boards, the cannons on top of the Tower walls boomed to announce to London that Anne Boleyn was dead.

Cranmer, when he heard it, wept, and said,

"She who has been a queen on earth is now a queen in heaven."

When Anne's newly widowed husband, King Henry, heard the thunder of the cannons, he set off for Jane Seymour's house to celebrate.

There was still a man in the Tower, one of those accused with Anne, though never tried for the supposed crimes. Thomas Wyatt had once been in love with the beautiful woman on the scaffold. He is believed to have watched her execution, and later wrote this poem: 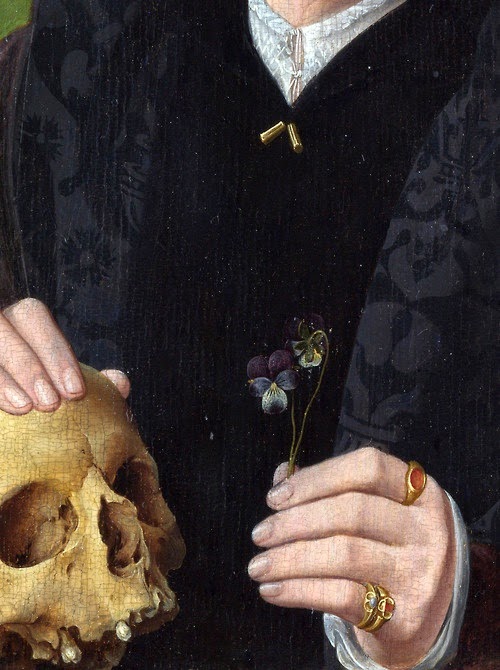 These bloody days have broken my heart.

My lust, my youth did them depart,

And blind desire of estate.

Who hastes to climb seeks to revert.

Of truth, circa Regna tonat.

The bell tower showed me such sight

That in my head sticks day and night.

There did I learn out of a grate,

That yet circa Regna tonat.

"Around the throne, the thunder rolls."

Continue to the next part to read about Anne Boleyn's burial.