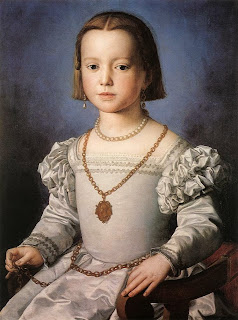 "Childhood," as we think of it, is a relatively new concept, invented in the Victorian era. The Victorians began to view childhood as a time of innocence and play - for wealthy children, at least - but this was not how childhood was always viewed in earlier eras. Children, for the most part, were expected to behave like adults. Few allowances were made for their youth when it came to education or making mistakes.

The Tudors saw childhood as a somewhat dangerous time, and not just because 50% of children didn't live to see adulthood. They saw children as being in severe danger of becoming reckless, immoral people, unless very strictly kept to the path of righteousness.

Showing affection, it was said in advice manuals, would spoil a child. Affectionate parents might not discipline as harshly as needed and a child's character would then tend toward evil. The advice manuals suggested a child needed regular corporal punishment to keep them obedient. Obviously, there must have been parents who resisted this notion, because the manuals insist so strongly upon it. They warned that sparing the rod would lead to sedition and evil, perhaps even to patricide. 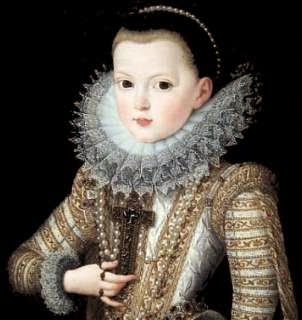 And if thy children be rebel and will not bow them low,
If any of them misdo, neither curse them nor blow [yell];
But take a smart rod and beat them in a row,
Till they cry mercy and their guilt well know.
Dear child, by this lore
They will love thee ever more

Children were urged to see these beatings as being in their own best interest:


A wise child, lore he behoveth;And as men say that learned be,
Who spareth the rod, the child hateth he;And as the wise man saith in his book,
Of proverbs and wisdoms, who will look:
"As a sharp spur maketh a horse to move,
Under a man that should war prove,
Right so a yard [rod] may make a child,
To learn well his lesson and to be mild."Lo! children, here may ye all hear and see,
How all children chastised should be.
And therefore, childer, look ye do well,

And no hard beating shall you befall. 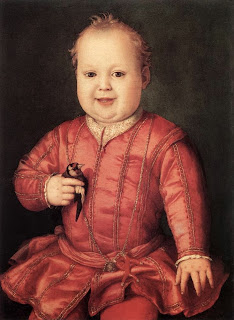 For when I am in the presence either of father or mother, whether I speak, keep silence, sit, stand or go, eat, drink, be merry or sad, be sewing, playing, dancing, or doing anything else, I must do it as it were in such weight, measure and number, even so perfectly as God made the world; or else I am so sharply taunted, so cruelly threatened, yea presently sometimes with pinches, nips and bobs and other ways (which I will not name for the honour I bear them) so without measure misordered that I think myself in hell. 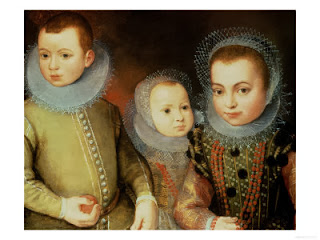 You may have heard of "whipping boys" used in Tudor times. This was actually a less formalized custom than might be suggested by the term. For very highly ranked children, the school master might hesitate to strike them. Instead, they would beat the child's favorite companion/servant, inflicting emotional pain, rather than physical. Charles I had a common-born companion named William Murray who served as his whipping boy. When Charles became king, he made Murray an earl. 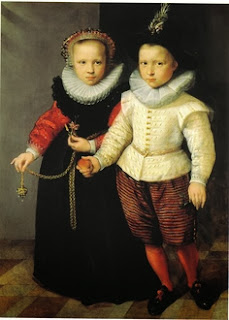 Corporal punishment did not end with childhood. Servants and wives were frequently whipped. Cardinal Wolsey is recorded to once have taunted Will Somers with a rhyme: "A rod in school/ and a whip for a fool/ are always in season."

Children were expected to have deep, reverent respect for their parents or face the rod. Noble-born children - raised by an army of wet nurses, "rockers," dry nurses, governesses, and tutors - likely only saw their parents once per day, when they went to seek their parents' blessing before bed. In the evening, children would be presented to their parents to ask for a blessing. They would kneel in front of them, removing their hats. They would sometimes be asked to recite their lessons for the day or a Bible verse, and then the parent would lay their hands on the child's head and bless them. (Traces of this custom remain in parents giving their children a good night kiss.) Even as adults, children were expected to kneel in front of their parents.

And child, worship thy father and thy mother;
Look that thou grieve neither one nor other,
But ever, among them thou shalt kneel down,
And ask their blessing and benison [benediction].

Education began very early, especially for royalty and the nobility. Princess Mary was able to play the virginals well enough to impress Imperial ambassadors at age four, and was able to speak Latin by age nine. At age three, Prince Arthur Tudor had a strict educational schedule which made him proficient in languages and statecraft, and conversant in all of the prominent classical philosophers by age fifteen.

It was customary to send a child away at age seven or eight to continue their education in another family's care, or as in Anne Boleyn's case, to send the child to court to be placed in a noble's household, almost like a finishing school.

The daily schedule for children was very long in comparison to today. The following is the account of a school day schedule from 1612:

Work begins at 6, and those who come first have the best places. At 9 o clock, there is given 15 minutes for breakfast and recreation; then work continues until n[oon] or past (to balance the 15 minutes off). Dinner follows, and then work until 3 or 3:30, then 15 minutes off, and work until 5:30, when school closes with a piece of a chapter, two staves of a psalm and prayer by the master.

Princess Elizabeth learned languages with the method of "double translation." She would translate a text, and then a couple of days later, translate it back to English and see how closely it matched the original. It was an activity she apparently enjoyed so much that she did it for fun in her adult years.

Poor children, of course, worked just like adults when they were physically able to do so. Some common children were able to go to parish schools and such, but only if their parents could spare their labor. Children were allowed to play, but it depended a lot on economic pressures and how closely their parents adhered to the notion espoused by advice manuals: that children should be "sober and sad" and devote their time to work, study and prayer instead of games.

Children were dressed in the same clothing as adults. Until age six or seven, a boy wore dresses modeled on those of his mother.

Some things never change. Commentators of the day suggested parents should not let kids choose their clothes because of children's foolish taste in fashion:

Let not children have their pleasures in the ordering of their garments. Some delight to have them jagged and cut; but such fantasticness ought to be reformed by wiser and elder, considering their foolishness is beyond measure, if all may be done at their pleasure; and ancient writers repute them out of their wits and madmen that favour it. Again, painted and gawdy apparel is not so fantastic in children's eyes ; but as costly to the parents purses, whereby ancient writers proclaim such parents fellow-fools with their children.


Being "breeched" signified the boy's passage into the male sphere of life, rather than a mother's care. The three ages of childhood were based on sevens. The first stage was infancy, the second stage was until age fourteen and was the main educational stage. After fourteen, the child was considered an adult in almost all respects, old enough for marriage.

Email ThisBlogThis!Share to TwitterShare to FacebookShare to Pinterest
Labels: Children, Life in the Tudor Era