Mayday: The Arrest of Anne Boleyn 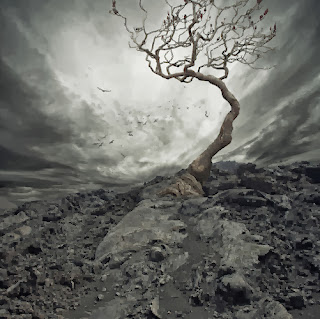 May 1st, 1536 was a bright and sunny day, but behind the scenes, the thunder rolled around the throne.

For weeks, there had been ominous signs that something wasn't right. On the 23rd of April, Henry had given the Order of the Garter to Anne's greatest enemy at court instead of her brother. Ambassador Chapuys crowed in his letters that "the Concubine" no longer had enough influence to get honors for her family. Anne could see the dark clouds gathering.

Three days later, Anne spoke with her chaplain, Matthew Parker, about her fears. Parker says she asked him to watch over her daughter, Elizabeth, if anything happened to her.

A Scottish courtier named Alexander Alane would later tell Elizabeth I that he witnessed Anne standing behind Henry at a window, baby Elizabeth in her arms, pleading with him, but Henry's expression was stony as he ignored her. When would this have happened? As far as I know, Elizabeth's last visit to court where her mother and father were both present had been in January, right after Katharine died. Even then, there had been indications that things were going badly in the royal marriage.

Katharine's death should have been the final confirmation of Anne's status as queen. There was now no other living claimant to that title, and Anne was indisputably Henry's wife. But on the day of Katharine's funeral, Anne miscarried of a baby boy. One historian said that Anne had "miscarried of her savior." It's an apt summation. Had Anne's little prince been born, she would have been safe ... for a while, at least.

After her miscarriage, Henry visited Anne only to coldly state he could see God would not give him the heir he sought. He said he'd speak to her when she was on her feet again, and left without words of comfort or emotional support for the trauma she had just undergone. Henry then ordered the court to move to another palace, leaving Anne behind as he used to leave Katharine behind.

It took Anne weeks to recover, and while they were outwardly still king and queen, the marriage was over. It's likely Henry hadn't visited Anne's bed since they created that ill-fated little prince. They exchanged polite greetings in public, but that was all.

Adding to her stress, Anne had also had conflict with Cromwell, Henry's chief adviser. Anne wanted the funds from the dissolved monasteries to be used to found schools. Cromwell wanted it to go to the king and the nobles whose lands would absorb the monastic properties. 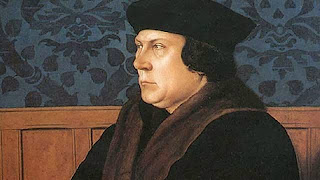 Some historians have proposed that Cromwell was the main driving force behind Anne's fall, with Henry portrayed as almost a dupe of Cromwell's scheme to frame Anne, but I think that's unlikely.

Cromwell would not have dared to move against Anne if Henry had not shown himself to be amenable to the idea. Indeed, Henry's demeanor shows him to be cheerfully indifferent to Anne's fate, as opposed to the weeping and storming he did over Katheryn Howard. Anne's fall was entirely at Henry's behest, with Cromwell doing the legwork. 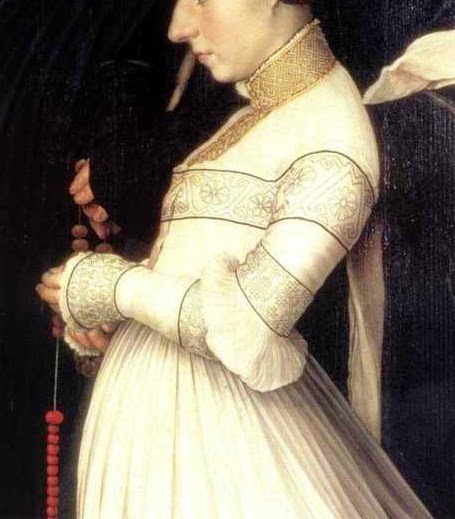 But outwardly, everything was normal. The king had even signed a letter a couple of days before in which he mentioned his "entirely beloved" queen and said it was likely God would send him a male heir soon. About this same time, Henry said to an astonished Ambassador Chapuys that he had been tricked into his marriage with Anne by the promises of soothsayers that she would have a son, and thus he felt it was invalid, leaving him free to remarry.

Now, on Mayday, the king rose from his seat and departed the jousts. He left word he would be staying at Westminster that night, a sad situation to which Anne had no doubt become accustomed. And no doubt, Jane Seymour was lodged nearby ... 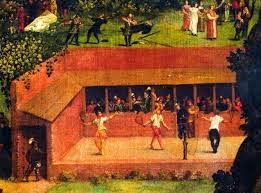 On the morning of May 2nd, Anne rose and broke her fast before hearing mass in her closet, seated behind a privacy screen. Afterwards, she was groomed and dressed by her ladies, preparing to attend a tennis match. One of the athletes Anne sponsored was playing, and though she likely didn't feel very enthusiastic about it, it was her duty as his patron to appear. And Anne always did her duty, whatever her emotional state.

But just as she was settling down to watch, a message arrived. Queen Anne was ordered to appear before the king's council. Anne must have stared at the messenger in disbelief. Queens were not ordered to appear before anyone. The council should have begged for an audience with her, and not sent this terse command. But Anne rose and followed the messenger back into the palace toward the council chamber. 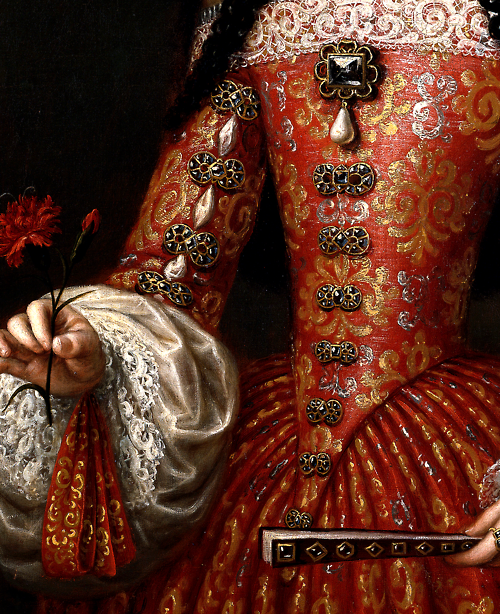 Various accounts have her laughing and saying the king was just playing one of his pranks, doing this to test her, though he hadn't been playful with her in a very long time at this point. The only explanation is that Anne was trying to publicly downplay this alarming turn of events.

It must have been a surprise to find only three council members present, one of them her uncle, the Duke of Norfolk. Later, Anne complained of his demeanor toward her, shaking his head and tut-tutting at her.

Norfolk told her that the three of them had been empowered to investigate her "evil behavior" and that she stood accused of adultery. Though she did not know it yet, her brother, Henry Norris, and Mark Smeaton had all been already taken to the Tower. Smeaton was possibly being tortured as they spoke.

Anne is known to have had the habit of laughing when shocked or stressed and she must have laughed at that accusation in disbelief. She denied the charges, of course, but none of the men were inclined to believe her. 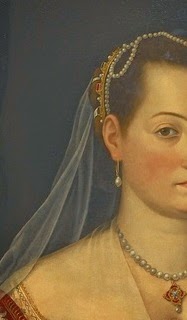 In fiction, including mine, Anne is usually sent straight to the Tower after this interrogation, but she was actually dismissed to return to her chambers while the council awaited further instructions from the king.

Back in her apartments, Anne changed her clothes and settled down for the mid-day meal. She did not say anything to her ladies about what had transpired. She ate, outwardly composed and pleasant. The courage and strength that must have taken impresses me still. But Anne had lived her entire life in the public eye, and knew well that everyone would be watching her. If she had appeared afraid, they might have taken it as a sign of guilt.

What must have been going through her mind as she ate? She had to be wondering what would become of her, if the king believed these allegations, and what would happen next. But she betrayed no sign of the turmoil she must have been feeling. Were her ladies whispering? They must have been - nothing stayed secret in the court for long. But the intricate dance of a royal meal continued as usual. 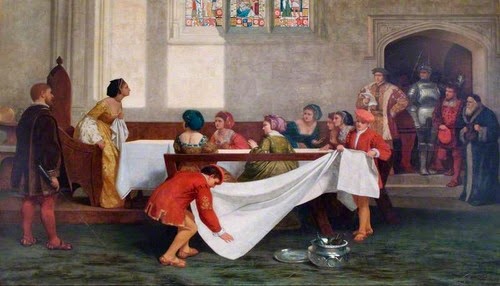 As the meal ended, the door opened, and in came the three men "empowered" to investigate her,
accompanied by more members of the council. They produced a warrant and announced she was under arrest, by order of the king. Henry had signed the warrant himself.

Anne kept a tight grip on her composure, and said, "If it be His Majesty’s pleasure, I am ready to obey.”

She followed them through the halls of the palace, past the shocked and whispering courtiers who must have stared in astonishment at the unprecedented sight of a monarch being arrested. Queens, when accused of crimes, were merely confined under house arrest at the command of their husband, above earthly judgment as they were. Here was a queen of England, crowned in her own right, being taken out of the palace to a barge waiting at the dock. To be conveyed to the Tower like a common criminal.

But Henry wasn't thinking of what damage this was doing to the aura of untouchable power of the monarchy itself. He was thinking about the quickest way to rid himself of a woman he had come to despise. And this time, his new bride would not have another living claimant for her title.

None of Anne's ladies were permitted to accompany her. Most of them would never see her again after she stepped on board. The last voyage of Anne Boleyn's life was undertaken without a friendly face around her, or a hand to clasp for comfort. 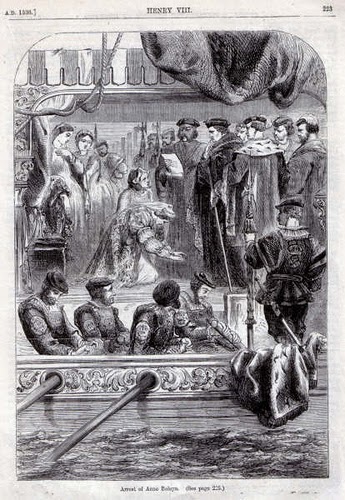 The horrible journey to the Tower took two hours because the tide was against them. The queen's colorful barge made its way up the river, propelled by rowers pulling their oars in time to a muffled drum. Her coat of arms were boldly painted on the barge's sides, and despite the muffled drum, the people who spotted it inching across the water must have run down to the shoreline to watch, as they always did when nobles passed. Did some of them cheer and wave, unaware of the queen's fall from grace? Did she hear any jeers or insults? Did she sit outside in the warm sunshine as they approached the grim stone fortress, or did she conceal herself beneath the canopy's shadow? We don't know.

They approached the Tower at last and guided the barge through the Byward Gate - not the Traitor's Gate. As Anne stepped out of the barge onto the paving stones, the cannons fired to announce an important prisoner had arrived.

She would never leave.