The Meeting of Henry VIII and Anna von Kleefes

January 1, 1540. Three years after Jane Seymour's death, Henry VIII is about to meet his fourth wife, Anna von Kleefes (Anne of Cleves.) Anna isn't featured in Under These Restless Skies, but she will be in the sequel, The White on the Crimson. 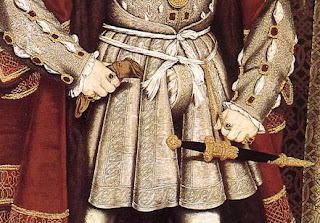 Henry's usual matrimonial hunting grounds, his queen's ladies in waiting, hadn't stirred up anyone of interest. This time, Henry would marry a princess for an alliance to benefit England. The search began before Jane Seymour was even in the ground.

It wasn't easy to find a new bride for the scandalous king. Christina of Denmark is reported to have said of Henry "If I had two heads, one should be at the King of England's disposal." It's probably apocryphal, but it shows the attitude of Europe at the time. In most circumstances, royal parents wouldn't care if their daughter didn't want to marry their chosen bridegroom. (Anna's sister-in-law, Jeanne d'Albret, had been whipped by her parents when she refused to marry the Duke of Cleves, and had to be physically carried to the altar by the Constable of France when she refused to go.) But in this case, the crowned heads of Europe agreed with their daughters. Catholic monarchs didn't want to ally with a king who had been excommunicated. Protestant monarchs were offended by Henry's relentless persecution of Lutherans in his realm, and his insistence on keeping all of the Catholic elements of worship except for the authority of the Pope. 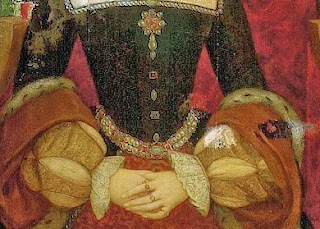 Compounding the difficulty was the fact that Henry needed his marriage to bring him a beneficial alliance that would help shift the balance of power in Europe in his favor. There weren't many princesses that fit the bill.

And Henry insisted that his wife had to be beautiful. He was troubled by having to rely on ambassadors, deputies, and others to describe the women and their attributes to him. When it came to selecting his bride, Henry said:

"I trust to no one,but myself. The thing touches me too near. I wish to see them and know them some time before deciding."


He suggested through his ambassador that the French should send their candidates for a visit to see if Henry found any of them suitable.

The French reacted to this bizarre suggestion with ridicule. They would not be trotting out princesses for Henry to inspect like hackneys he was considering buying. It's recorded that Henry had the grace to blush when the French ambassador said this.

Henry's behavior in this matter was outrageous, to say the least. Royal marriages were made for 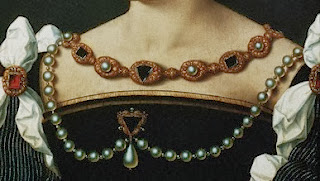 alliances between nations, and the attractiveness of the candidates wasn't really a consideration. Certainly, Henry hadn't worried whether or not his sister Mary Tudor Brandon would find the elderly French king attractive when Henry forced her to marry him.

Portraits would be exchanged, but often that was after the marriage had been agreed upon. And the princess would be married by proxy before she left her homeland for her new realm. It was the way things had been done for a thousand years in Europe, but Henry thought he should be an exception.

Cromwell urged Henry to accept Anna von Kleefes or Amalia, the sisters of a duke who ruled a small, but strategic, German country. Cleves was Reformist in its faith; one of Anna's brother-in-laws was known as the "Champion of the Reformation." Anna's mother, however, had been a strict Catholic, and Anna still adhered to her faith. But she was willing to obey her husband in regards to religion. 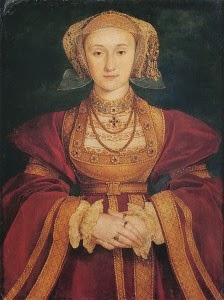 Henry sent the court painter, Holbein, to paint portraits of the two princesses and men he trusted to report on their beauty and attributes. Holbein's portrait of Anna shows a moderately attractive young woman with gentle features. He painted her head-on, which somewhat disguised her long nose. Ambassador Wotton, who had gone with Holbein, pronounced the finished portrait "a very lively [life-like] image." After viewing the two portraits, Henry picked Anna as his bride.

The ambassadors who met her said Anna was "... of middling beauty, and of very assured and resolute countenance." Anna wasn't beautiful, but she wasn't ugly, either. Certainly, she was prettier than Jane Seymour.

Anna was solemn and dutiful, the qualities that had so attracted Henry to Jane Seymour. By English standards, Anna wasn't sophisticated or accomplished. She wasn't a witty conversationalist, but she was gracious and charming. She did not sing or play any musical instruments, which the Germans felt were "unbecoming" for a lady, and in her brother's sober court, dancing was frowned upon. She could read and write, but only in German. She loved to play cards, and embroidered beautifully. And, as it would later turn out, Anna had such a brilliant political mind, Henry wished he could put her on his council.

The proxy marriage was performed and Anna was dispatched to England. She made her way across the sea and landed at Deal. From there, she set out on a slow, winding path for London, where she expected to meet her new husband. At every house she stayed in along the way, there were celebrations and feasts to greet the new queen. The courtiers she met were charmed by her. She was likeable and gracious. No one made any negative reports about her appearance at this time. 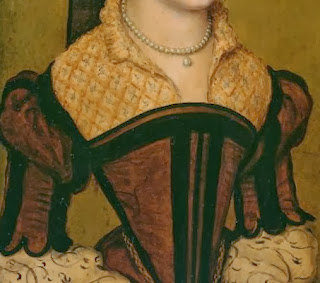 Henry had other plans for their first meeting. He was impatient to meet her and wanted to "nurture love" by getting to know her before she reached London. He decided to play one of the pranks of his youth, the games he used to play with Katharine of Aragon. In those long-ago days, he would dress up as a highwayman and invade Katharine's chamber, demanding to dance with the queen. Katharine always pretended to be surprised when he took off his disguise.

Henry dressed himself in a "mottled," or ragged, cloak and hood, and went to Rochester. He called aside her steward and announced he had come to meet his new wife. Henry may have been remembering the romantic stories of French and early English monarchs who had first checked out their brides while in disguise and then revealed themselves to them. The romantic outcome was that the princess was supposed to fall in love with the "stranger" because their hearts would know one another, even if their eyes were fooled.

Did anyone tell the king it might not be a good idea to "introduce" himself in such a way to a girl who came from a far away land that didn't have the same courtly traditions, and hadn't read the same romances he had? If they did, it didn't deter him. 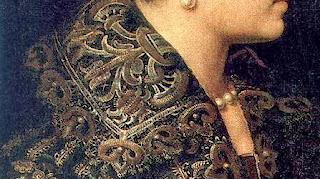 Anna was in her chamber, gazing out her window, watching a bear-baiting outside staged for her amusement. Henry entered and announced he had a gift for her from the king. With that, he grabbed her into his arms and kissed her.

Anna was shocked at being manhandled by this obese, uncouth peasant. It's not hard to imagine she had a look of disgust on her face as she recoiled. She turned away from him and stared out the window, likely unsettled and unsure of what to do.

It was probably the only time Henry had ever seen a look of repulsion aimed in his direction. He was surrounded at all times by trained courtiers who gazed at him in adoration and assured him he was the most handsome prince in Christendom. Anna brutally shattered that illusion in a single moment. She did not swoon and fall instantly in love with him. She did not pretend coy delight. She showed him - stripped of courtly pretence or artifice - what she thought of him, and it wasn't flattering. 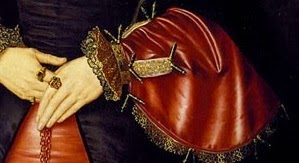 What must Anna have been thinking? It must have been bewildering and frightening to her. She was a royal princess who had just been assaulted in her new homeland, and no one was doing anything about it. Her servants hadn't thrown out the stranger. Was this the kind of lack of respect she would have to learn to expect here?

Henry left the room and returned dressed in his kingly robes. Anna was deeply embarrassed; Henry probably was, too. But he played his part.

And when the lords and knights saw his grace they did him reverence.... and then her grace humbled herself lowly to the king's majesty, and his grace saluted [kissed] her again, and they talked together lovingly... 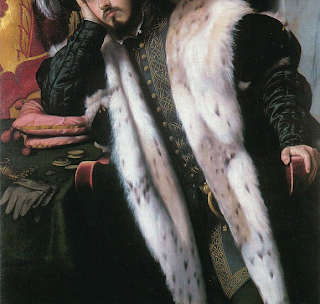 But behind the scenes, Henry was fuming. His pride had suffered a brutal blow, and as Henry usually did when hurt or angry, he deflected it on others. Anna was the one who was repulsive, not him!


Henry had a litany of complaints about his new bride. She looked old. She smelled bad. Her clothes were terrible. He added darkly, "I am not well handled." He began to blame those who had "deceived" him into marrying her, and as his courtiers usually did, they hastened to agree with him that Anna was hideous. However, disintered parties such as the French diplomat, Charles de Marillac, described Anna as beaulté moyenne, "medium beauty," which is better than he rated Katheryn Howard, who Henry thought was a knock-out.

Henry tried to wriggle out of the marriage, scrambling to find reasons why it might be invalid. But nothing could be uncovered. All of her paperwork was in order. Henry whined:

"Is there no other remedy, but that I must needs, against my will, put my neck in the yoke?"

Henry was deeply resentful when forced to do anything, but in this case, there was no escaping it. To annul the proxy marriage and eject Anna from England would be to alienate his new German allies, whom he needed desperately since the Emperor was now allied with the French. Another way would have to be found to rid himself of her.

Oddly, he never blamed the portrait's artist, Hans Holbein, or said the portrait was inaccurate. Henry continued to give him commissions. It was Cromwell who would bear the brunt of the king's displeasure.